HOME | Minis Blog | About Us | Contact Us | Search | The Minis Zine

About the name "Beacon Hill" as found in history:

BeaconHill is a name associated with a most desirable and expensive neighbourhood today. But it is also a name shared by many hills, suburbs, villages and coastal areas of the world.

In the UK BeaconHills were warning sites in the Elizabethan times when Britain wanted to be alerted to the coming invasion of the Spanish Armada.

It is generally a name that has been used and around for centuries. In fact the name is still very much in use today.

Boston's famous Community of the world.

In Boston "BeaconHill" is used as a "metonym" in local news to refer to the state government. This Boston community is also noted for its landmarks in both white and black history.

Today we find the name BeaconHill also associated in venues such as designer fabrics.

With all these attributes partnering with the name BeaconHill, is it any wonder we also find Dollhouses with the same name also on the most wanted lists for miniature enthusiasts?

The Beacon Hill Mini Dwelling is definitely a sought after masterpiece in its own class.

It is owned by people who like to construct their own dollhouses as well as those who just prefer to purchase it as a solid finished item.

Everyday people own them as well as the affluently sophisticated.

Some BeaconHill Mansion Characteristics are:

While reviewing these characteristics we can see some of the stately, up on a hill, watchfully crafted attributes of our previous description of the name BeaconHill itself. Can you?

It's appearance is similar to a beacon of sorts. The way that its stately roof is shaped depicts a beacon does it not?

It holds the grandeur of an affluent and expensive neighborhood. Can you see it as one of the homes found in a community such as is pictured below and described on this page?

This particular Community bares a striking
resemblance to the Dollshouse by the same name.

Your BeaconHill Kit will include:

Neither of the last components are troublesome to supply for ourselves. Providing your own paint will help make this miniature truly your own. Which is what we want anyway.

Costs of a BeaconHill Doll's Home

Costs are between $50 and $240 depending on the size you choose. As well you can go to various online providers who will construct it for you. With prices upwards from what have just been mentioned.

Any price you look at really depends on what you want in the end. With kits to choose from in your price range being available with every level.

Design Tip #1
How to Build Your Own Dollhouse

Begin any creative project with great information. You can not lose if you have Thee Best Resources.

Introducing the most Stately Dollhouse

Check out all the Beacon Hill Dollhouses in this Section.

Interested in pursuing a brand new miniature project? This Beacon Hill Mansion can be your next great tiny structure accomplishment!

Check out this information block for a word about the below Search Box... Replace the word inside the box with the subject name or keyword of what you are looking for where appropriate. This will open a new window for your browsing convenience.

Have your say about what you just read! Leave me a comment in the box below.

Dear Friend at the Doll House:

As an Amazon Associate we earn from qualifying purchases. So accordingly any link to Amazon opens in a new window on their site and gives us a commission if you buy. In turn it helps earn a small amount toward maintaining this site. Thank you for helping us keep doing what we enjoy.


Finally!
Your Own Projects!

Learning "how-to" design is an easy process when you have great resources to help you. 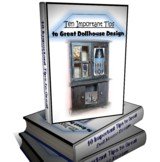 Get Your Free EBook